What is Paramita Sound?

Paramita Sound is a home, where you can dig up new vinyl records, meet friends, and share a few beers. We are reimagining the vinyl record store experience, merging new technology with a century old format. Our primary focus is new release vinyl, unlike most record stores that are focused on rare and used records.

I went to school for music business and always wanted to work in the music industry. But what I really wanted was to create a community environment around music. My two favorite things are grabbing a beer and shopping for records, so why not do them together?

I took Build to put some structure around my idea and be in that classroom atmosphere. I was already working at D:hive at the time, and knew I needed to grow my network before launching my business. The variety of guest speakers in the class was definitely a highlight. I met my graphic designer, Joshua Smith, through Build, which has been an amazing partnership. I was introduced to many people I would eventually come across again while getting my business up and running. 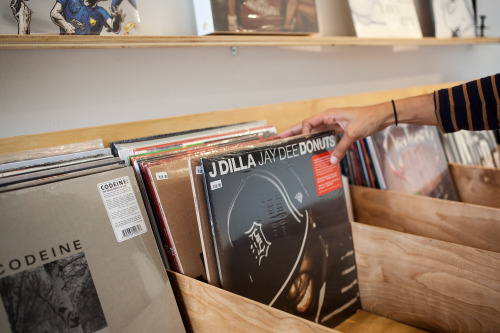 “I was introduced to many people in Build I would eventually come across again while getting my business up and running.”

After Build, I entered the Activate 1417 Van Dyke contest, a project of PracticeSpace and Revolve Detroit. Through that competition I won a live/work space in West Village. During the development process I moved to West Village, took a part-time job at a restaurant in the neighborhood and started building relationships with other business owners in the community. We just had the grand opening of the pop-up! It will be open until January 10th and we are working to remain in the space permanently.

I also just finished Tech Town Retail Bootcamp, which I found out about through Build, and Retail Bootcamp led me to become a SWOT city client. Every new layer has built upon the previous one to help me get to where I am now.

What’s in the future for Paramita Sound?

We hope to expand renovations for our bar and backyard biergarten, eventually utilizing our entire space in West Village. We are also launching our small, independent record label. I want Paramita Sound to be a destination for music enthusiasts but also a community gathering space. If there’s one thing music always does, it creates a dialogue that encourages people to share their opinions, like a neighborhood barbershop but with music as the foundation.