Hundreds Learn About Launching a Social Enterprise in Detroit

“Profit with a purpose.”

These were the type of phrases bantered about on Wednesday, May 5, at Social Entrepreneur Day, part of Detroit Entrepreneur Week, May 2-7, 2016. The day was presented in partnership with Build Institute, which is a strong advocate for social enterprise and small business support.

For the 120 Social Entrepreneur Day attendees, who filled a spacious room at TechTown Detroit, the day started off with an overview of social entrepreneurship (the pursuit of a social mission using commercial means). Marcus Harris, Build’s facilitator of Build Social, small business taskmaster, and one of social entrepreneurship’s most vocal champions quickly captivated the audience with his wisdom.

Shaka Senghor sharing his story with the audience.

Shaka Senghor, a New York Times best-selling author, presented next. With the story of his personal turnaround, triggered by an epiphany inside a prison solitary confinement cell, he spoke of his journey into crime and drugs, through his 19-year incarceration, and out into the world to become an author, social entrepreneur, and change maker. The Detroit native’s current work focuses on mentoring youth, eradicating gun violence, and getting more books into prisons.

Senghor’s entrepreneurial challenges were greater than most: out of prison for second-degree murder with little chance of finding a job, he sold his books from the trunk of an old Honda Civic and drove from school to school talking to kids and telling them his story.

“I realized I had no work history,” recalls Senghor, having been in prison since he was 19. “But had a dynamic skill set.” Senghor had been selling drugs since he was 14 and ran black market stores in prison. “I took that skill set and said ‘I’m going to start a publishing company.’”

He wrote, slowly gained notoriety, and started a mentoring program for at-risk youth. He presented one of the top TED Talks of 2014, and was awarded fellowships with M.I.T. Media Lab and the W.K. Kellogg Foundation.

As Senghor spoke of achieving one of his long-time pursuits, to meet Opra, he advised the crowd, “As you’re working on your business, be intentional about what you want to manifest.” He cautioned against becoming “socially invested and financially broke.” 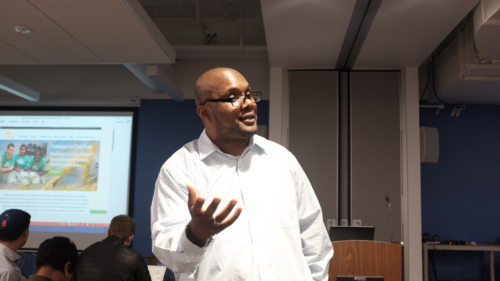 Led by Harris, the session further defined items on the placemat-sized canvas, such as identifying customers, defining a solution, and outlining benefits and start-up costs. As participants scribbled their ideas onto their own maps, Harris cautioned: “This ain’t your business plan. It’s more of a pre-plan. You can use this model as a foundation.”

Social Entrepreneur Day participants had a chance to learn from the doers as part of the last session of the morning, “Meet the Social Entrepreneurs,” a panel discussion with successful social entrepreneurs, social impact investors, and representatives from organizations that offer training and support. The panel was populated by: 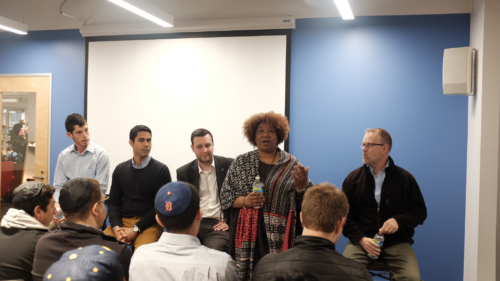 The group answered questions about their early inspirations, handling competition, balancing money issues with social purpose, and dealing with doubt.

When asked about challenges specific to Detroit’s social enterprise movement, many panelists voiced concern over the absence of resources in Detroit – good schools, lack of money, subpar city services – but also recognized that Detroiters have the drive and grit to keep going.

Fr. Phillip Cooke, who moved to Detroit after doing social enterprise work in Santa Clara, Calif., recently conducted his first program at UDM CSE on writing business plans with a triple bottom line (social, environmental and financial). “The energy in the room was fantastic,” says Cooke. “It was energy that I had not seen in my life. All that Detroit is missing is resources.”

For Detroit entrepreneurs knowledge is just one piece of getting a business going. Capital is still a huge challenge, which is why programs such as Kiva are vital. Therefore, it made sense to culminate Social Entrepreneurship Day with an activity focused on pitching ideas and giving away money for startups.